With an exhibition in the Tropenmuseum [Amsterdam, the Netherlands] about the history of slavery, Richard Kofi wants to encourage people to talk about inequality today. […] How do you tell the story of slavery and colonialism with a leading role for the victims? Dutch museums struggle with that question. They feel pressure from today’s youngsters. Lonneke Van Genugten of OneWorld has contributed this item to De Volkskrant.

“Afterlives of Slavery, the name says it all.” Richard Kofi is one of the curators of an exhibition about the history of slavery that opens on October 6, 2017 in the Tropenmuseum. “We show the social structures that made it possible for slavery to exist, as well as how colonial ideas persist in the present ― think of stereotypes about black people, the unequal playing field on the labor market, or the n-word that is still so easy to use.”

Kofi, a visual artist and exhibition curator, [… explains that] the focus will be on transatlantic slavery and the Dutch share therein. “We are leaving out East Africa, South Africa and East Asia. There simply is not enough room for them. We would not do justice to the stories and traumas.”

Visitors will see prints, texts and objects. For the most part, these will be drawn from the Museum’s own collection: dug from cellars and found in attics. In the depot, the curators even found a stamp that was used to brand people. Your body shivers when you realize that this object actually mutilated living human skin.

“Slavery made rapists and killers out of people,” says Kofi. “The trader or owner who degrades another human being into a product turns himself into a monster. What I find annoying is that people always immediately retort with: Did you know that black people also held slaves? Or that the living conditions of the enslaved in Suriname were better than in Africa? That really irritates me.”

This theme runs through all the exhibitions that Kofi has curated so far. “It comes from my own experience with discrimination and racism. I have plenty of examples. In high school, I had a B grade point average, yet I was still advised to switch to a vocational school. Well, I did not let that happen. I learned not to allow people to discriminate me. You would not believe what I have heard people say to my father … He was a physician in the Netherlands, who came from Ghana, but people ascribed to him something very different.”

When Kofi was doing General Cultural Studies and American Studies at Nijmegen’s Radboud University and the University of North Carolina, he used to suggest alternative literature, artists and music to supplement the curriculum. “That’s the origin of my interest in shaping perspectives. I consider it a privilege to curate this exhibition about issues that I experience in my own life but do not see reflected in the prevailing social discourse. There are many good books, but few good conversations. I hope that this exhibition will be a conversation starter.”

The curators have consciously chosen a black perspective. “We explain that a certain logic caused people to do very ugly things, but that the enslaved also had a sense of agency, resisted, and subverted the status quo.”

Activism is a common thread in the exhibition. “The history of slavery is not just about oppression, but also resistance,” Kofi emphasizes. “There are artefacts from [Surinamese] Winti, which was created as a counterculture, and musical instruments that symbolize the retention of African identity. Of course, there are objects from Maroon communities, but also Anansi stories and tambu music from Curaçao.”

The Tropenmuseum was originally established as a storehouse of the Dutch colonial enterprise. How does a curator deal with that? Kofi: “Objects were indeed collected and described from that perspective. For some time now, we have been trying to do something new with that, and we are now adding the dimension of activism.” Visitors will be invited to supply their own items for a showcase that may temporarily become part of the exhibition.

Kofi, Berger and Modest took advice from activists and academics [such as The Black Archives, #DecolonizeTheMuseum, visitors to the Keti Koti Festival, and the Afrikamuseum, all in the Netherlands]. Kofi also traveled to [the Smithsonian National Museum of African History and Culture in] Washington. “It’s a fantastic museum. Three whole floors about the history of slavery, along with the protest, the agency. That confirmed to me that we are on the right track.”

The original article (in Dutch) is available

For the announcement of the ‘Afterlives of Slavery’ Exhibition, go to:

Mention in: Sinterklaas is the ultimate middle finger to multiculturalism

Improvised Mach Up in Atelier 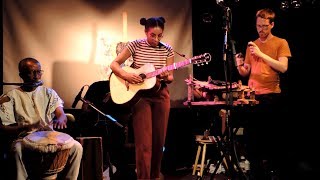